Influences and Methods: “Palladio was right”

Roger Thomas, the designer of the celebrated Wynn Hotels and Resorts properties around the world, grounds all his designs in both a solid foundation of historical context and real practical experience in the craft and production of furnishings.  “A conversation with Thomas is a master class in design,” Interior Design said it named him to their Hall of Fame in 2015. A graduate of northwest Michigan’s noted Interlochen Academy and Boston’s School of the Museum of Fine Arts, Roger’s training is always evident in his work.

“I wanted to create interior architecture and design even before I graduated from university and art school,” Roger explains to Architectural Digest. “I was studio-trained in painting, sculpture, textiles, metalsmithing, and ceramics, with a major in art history. Creating environments was the perfect combination of all of my passions.” A 2012 New Yorker profile noted that the designer is “an inveterate sketcher.” He travels widely and observes acutely, and his black and red Hermès notebooks are a treasure trove of ideas whenever he begins a new project. (He shares many of his observations as he travels and works on his blog.) 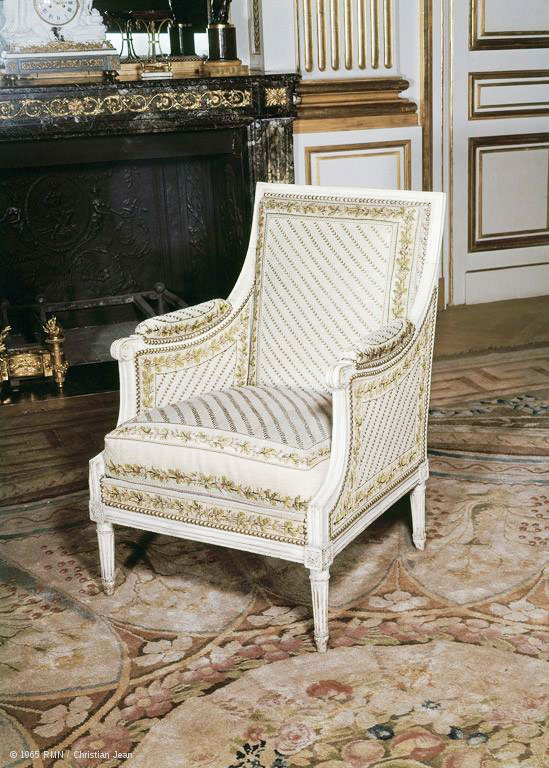 Chair in the Louvre, Paris

He will often hark back to the French Baroque, an era that to his mind was a Golden Age for interior design. As he explained to The New Yorker: “We’ve made a lot of chairs since the eighteenth century, but I don’t think we’ve made many better chairs. The artisans at the French court really found the ideal luxury seat. They identified the best dimensions, the best frame, the best angles. When you sit in an authentic Jacob chair you are sitting in one of the most comfortable pieces of furniture ever made. It’s a divine experience.” As MacArthur Award-winning cultural critic Dave Hickey told the magazine: “His stuff has layers, but you don’t need to get the layers to appreciate it.”

Roger told Elle Decor that the point of gorgeous materials and vibrant color is to create “drama, humor, mystery and surprise.” Memorable rooms are “fantastical.” As examples, he cites Versailles’ Hall of Mirrors, outside Paris, or the Marble Hall at Sanssouci Palace, outside Berlin.

For him, these storied spaces are more than monuments, inspiring bold ideas for the future.

“Increased globalization and exposure via travel and information technology will encourage ever more dramatic, even cinematic, concepts in design and architecture in terms of historic reference, scale and fantasy,” Roger has predicted in Architectural Digest. (The magazine has named him to its AD100 list of the world’s top interior designers and architects.)

Roger spends holidays touring world capitals, sketching his way through museums, restaurants, hotels and great houses. Even as he looks ahead, his respect for history and the great designs of the past continues to inform his work. “Palladio was right,” he says. “So why argue?”

SERENITY AT A PERSONAL SCALE